TL;DR Intro to Docker’s basic functionality and concepts. Keep reading if you are new to Docker or want to learn about it.

Today we are going to focus on a fundamental modern software technology, Docker. We are trying to analyze Docker by answering three simple questions around it. What is Docker, why should we adopt its usage, and when is the right time for this.

We are going to explain some of its basic components and the high-level picture of how they work together. Finally, we are going hands-on on our first Docker trip by spawning a containerized webserver in seconds!

If you are already familiar with Docker but would like to check the second part of this Docker adventure where we investigate more advanced topics, click here: Taming the Dockerfile

What is this sorcery - Docker Intro

This is achieved by packaging applications into containers along with everything else they need, allowing them to be considered and deployed as one package.

Our code with its dependencies, libraries, tools, runtime environment, and operating system is combined into a standard unit of software that can technically run in every environment without any other requirement, well apart from Docker itself being present.

This is actually the magic of Docker, eliminating the need to care about different environments, installing dependencies while allowing our software to run on any machine. This means that Devs can focus on writing and developing their code and Ops have a new flexible tool in their arsenal to help them manage complex software systems. 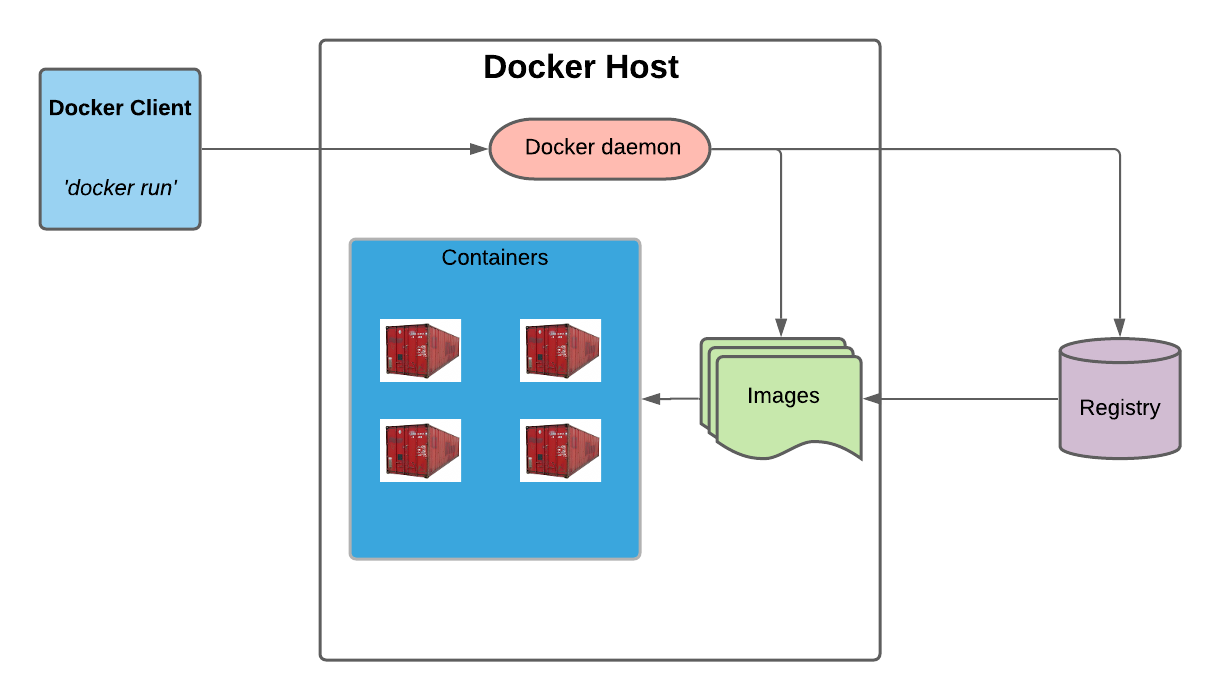 Docker is like a client-server application including a server called the docker daemon process(dockerd), a REST API that provides interfaces to talk to the daemon and a command line interface client(command docker).

The client is the main way of interaction for the users and via commands like docker run informs the daemon what is supposed to be done. Then the daemon which is listening for those requests gets to work by managing accordingly the various docker objects.

The docker client and daemon can live on the same system (the case of running docker locally on your machine for example) or the client can connect remotely to a remote daemon.

Why should I use Docker

Containers are considered the once in a decade shift in infrastructure and if you are working in any sector related to software development or IT this is one of the fundamental tools that you should know.

It’s the shift to the next object of computation as in some years(if not already) running software in containers will be the default practice. They are considered the fastest-growing cloud-enabling technology and Docker is the face behind all this.

There are of course other container tools but Docker is the defacto containerization technology and definitely the most used one. The real power that Docker provides us though is speed.

Speed of software development & delivery, speed of building and testing, speed of providing value, speed of bringing our software from idea to production.

Even more, as previously mentioned in the What section, containers reduce complexity by allowing us to run and test the software everywhere the same way. That abstraction simplifies and makes it easier to handle a lot of the problems around managing software lifecycle.

When is the right time to start using Docker

I know that migrating or learning a new tool and technology can be challenging but Docker makes this transition really smooth and focuses a lot on the migration experience.

Finally, we have a tool that can be used easily by any role in software development or IT like devs, ops, testers, build engineers, sysadmins etc and NOW is the time to jump on the docker ship.

The nice thing about Docker is that it doesn't require any code changes to your existing software and that’s actually one of the main reasons explaining why it has been adopted so quickly.

Before we jump into our first hands-on quick Docker trip, let’s first define some vocabulary that we’ll need.

An image is the application we would like to run along with binaries, libraries and everything that ultimately makes our source code, including also metadata about how to run it.

A container is a running instance of an image running as a process. So in the end containers are just processes limited by what resources they can access.

Images are usually stored in registries and Dockerhub is the default registry for Docker. Dockerhub is for docker images what Github is for source code.

Ok enough with the blah blah, show us

Ok by now you should be fully onboard on the Docker train chu chuuuu, demo time.

If you don’t have already Docker installed here is the link to the official documentation regarding installation instructions per platform. For this demo, we are going to use the nginx webserver image, which can be found here.

Go in your terminal and just run:

And dadaaaaaah you have an nginx webserver up and running. To validate go to your web browser and type: localhost:80 and you should see something like this:

Well done running your first docker container! That was easy, wasn’t it?

Let’s go see what happened there. When we run this command docker tried to look for a docker image named nginx, couldn’t find any so it went to Dockerhub and downloaded the latest image and then started it in a newly created container.

Also with the -p 80:80 option, we instructed our container to expose traffic on our host IP at port 80 and route it to the container IP port 80, pure magic. The -d option runs the container in the background and allows us to continue using the same terminal for other stuff.

To verify this go back to your terminal and run the command that lists our running containers:

And you should see something similar to this:

Note there is various info there. You get your container id (every container has a unique id), the image from which it spawned, the default command used when the container starts when was your container created, it’s status, what ports are exposed and a random & usually funny name attached to it (if you don’t specifically specify one).

To stop a running container get the id from the above output and execute:

now running the same command again should return nothing:

If you want to see your stopped containers run:

Ok, let’s say I want to specify a name for my container so that I can reference it easily and I don’t have to grab the id every time, that can be achieved by using the --name flag.

Now if you execute again docker ps you will see that the container has the specified name and can be for example stopped by running:

If you stopped our webserver go ahead and restart the container by running:

This again starts the same previously stopped container instead of the run command which will create a new one.

Ok, what if we want to check how our webserver is doing? Let’s go check some logs:

And you should see something similar to this:

Let’s try to generate some more logs, go to your browser at localhost:80 where our nginx webserver is exposed and hit the refresh button a couple of times. Now let’s execute again:

Now you should have more logs in your webserver showing all the get requests you just did:

If you like also you can follow the logs in the terminal by specifying the -f flag. Try

And back to your browser hit the refresh button a couple of times and you will see the log stream being updated real-time.

The Docker tool has a lot of useful commands, and you’ll have to play a bit with them to explore them all. To list all the different docker commands just run:

It returns a list of options and commands. If you would like to learn more info regarding one specific command, for example, the login command, you can run:

And you get more information regarding the login command

Alright, let’s say we are done with our quick demo, and we would like to clean our containers.

Go ahead and run docker ps -a to list all your containers, running or not. To remove them, we’ll use the docker rm command.

Let’s go and remove both the 2 containers we created previously in one go:

Alright, that was it folks, a quick intro to Docker answering What-Why-When questions around it, defining some basic components, and finally getting our hands dirty with a small demo.

Hope you enjoyed this as much as I did and if you want to learn more, check the second part of our Docker trip Taming the Dockerfile where we deep dive into more advanced Docker topics and we are going to build our first Dockerfile.